Growing up in Evangeline Parish I experienced Mardi Gras in a different way than the articles described. When I think of Mardi Gras I think of chasing chickens, standing on horses, eating gumbo at the end of the day, and dancing to Cajun music. I’ve never personally been to New Orleans Mardi Gras, I’ve only ever seen pictures or heard the stories. This makes it somewhat harder to understand that Mardi Gras is a billion dollar industry as stated in “Carnival and Katrina” I was shocked but not surprised. 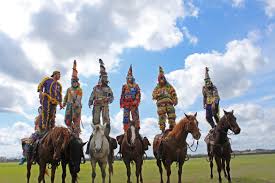 In “Marketing Mardi Gras” by Gotham it is explained what Mardi Gras has become. With floats being sponsored by Popeye’s and Coca Cola, it is easy to see how this yearly celebration has shaped the tourism industry of New Orleans. Gotham goes on to explain how Mardi Gras’ image is used to signify New Orleans and what it means to be in New Orleans. This can be seen any time you step foot in the city. There are beads, masks, boas, and other parade paraphernalia in every shop you go in. It also never fells that every time I leave the state someone will ask me where I am from, I will say Louisiana, and they will say “Oh, you’re from New Orleans” as they proceed to tell me about the one time they went to Mardi Gras there and got trashed. I enjoyed the explanation in this article on how culture and histories can be created because of signature images like a float rolling down Canal Street. No, New Orleans isn’t all about flashing someone for beads.

“Carnival and Katrina” by Reid Mitchell explained why the Gotham was correct in saying that culture can be created through tourism.  Mitchell explains that with or without the parade rolling after Katrina people were still going to take to the streets dressed up in the costumes because that’s what they do. This is more like what I am used to when it comes to Mardi Gras. We don’t need fancy floats, tourists, or anyone else for that matter to tell us when we can celebrate. Mitchell explains that Mardi Gras is beyond the Popeye’s float mentioned by Gotham. It’s about the people of New Orleans and Louisiana as a whole.

“Using the Bow and the Smile” reminds me a lot of the festival pageant world. Women are meant to be seen not heard, you are a reflection of your family. It was crazy to me to read about the girls who were literally raised to be queen of a krewe’s ball. Schooling and hobbies were centered around being the queen of a ball that would not matter if you left the state. While reading this article I often wondered how many people that celebrate Mardi Gras every year know about how some of the oldest krewes got started. These women were mostly chosen to sit on a thrown and be only looked at as a glimpse of the Old South still being relevant.

I am a graduate student at the University of Louisiana at Lafayette studying Public History. View all posts by abbiedeville

5 thoughts on “Are you from New Orleans?”